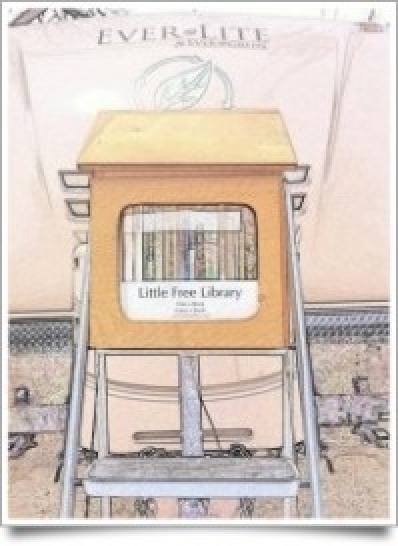 So with the library built and stocked, we gave it a test run for our next road trip. On this trek, we visited about four Texas State Parks over a few weeks. At the first park, although not terribly crowded, the library received much attention. After a little girl stopped by with her mother, we realized that we needed to have some children's books in the library. The next morning they visited again, this time donating a couple of children's books. Overall the experience of this trip encouraged us to take our mobile library on future travels.

So the next planned trip was what we called “Our Summer Adventure,” which took us up to the Northwest, then across to upper Michigan, and back home through the Midwest. The library and a small pack of extra books made the journey also.

After driving 8,707 miles through 17 states, camping in 26 different places, and setting up the library in most, I would like to share our observations about the mobile library. One thing the library did well was it proved to be an excellent conversation starter. It also was extremely popular with park hosts, with a few actually taking photos of it. Along the way, several reporters found out about it and wanted to do interviews; I gave one telephone interview to a writer. In some parks, the library was rather lonely, particularly in state parks with a large weekend crowd. The library received most of its use by older adults or children with their parents. When touring in a travel traveler, the extra weight of the library, books, and space they take up can be a concern, along with the chore of setting it up and packing it away on each segment.

My final thoughts are that I still am intrigued with the concept, although I read most of my books with a Kindle app on my iPad. On this trip, I've learned that many other RV'ers also read their books digitally. I have wondered if we stayed at locations longer, maybe several weeks at a time, that the library would have been used more. Or if we stayed at places where there were more full-timers (people who live in their RVs). Will our mobile library make future trips? The jury is still out on that one. I want to think so.